PROFILE OF A NATION: 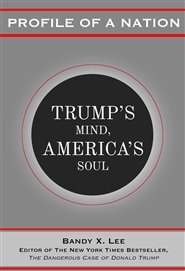 This book is a unique and timely major accomplishment by one of America’s leading intellectuals, Dr. Bandy X. Lee, a forensic psychiatrist with a long career at Yale University.  It is 174 pages and available for purchase at BandyLee.com.

Dr. Lee’s previous best-selling book, THE DANGEROUS CASE OF DONALD TRUMP: 37 Psychiatrists and Mental Health Professionals Assess a President, opened the door to understanding Donald Trump in-depth and has been published in many languages and countries.  This new book goes far beyond explaining not only Mr. Trump but the nation that elevated him and has tolerated him as President.

Dr. Lee’s epic new book is “the missing piece” that answers these questions and does so with accessible language and extraordinary insight.  She has devoted much of this year to researching and completing this book, but this could only be accomplished because of her advanced education at Yale and Harvard Universities, her nearly 20 years of extensive clinical and teaching experience at the Yale Medical and Law Schools, and her more recent activities as president of the World Mental Health Coalition.

At this critical time all seriously concerned Americans need to be aware of Dr. Lee’s conclusions and recommendations.  The book’s outline includes:

Chapter 1: A Profile of Donald Trump

Chapter 2:  A Profile of Trump Followers

Chapter 3:  A Profile of the Supporting Environment

Dr. Lee can be messaged for media and on-line zoom and skype appearances at [email protected].

A short free 10-page summary is available upon request, at [email protected]

NOTE:  A few days ago on 7 October Dr. Bandy Lee was featured at the top of Drudge Report alongside a picture of Trump and with a link to her feature interview in Salon (headline below) the previous day.  Her New York Times best-selling book, The Dangerous Case of Donald Trump: 37 Psychiatrists and Mental Health Professionals Assess A President, was published in 2017 with a second edition in 2019.  Now her uniquely important and exceptionally insightful new book has just been released.  The associated book of her organization, its transcripts, articles, interviews, and documents was published just a few weeks ago.  Both can now be easily ordered together – just click on book pictures below.

It “would not be an exaggeration” to say that Trump “delights in putting people in danger,” Dr. Bandy X. Lee says 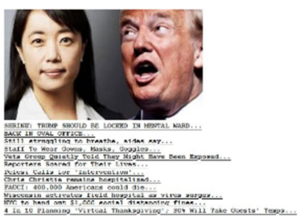 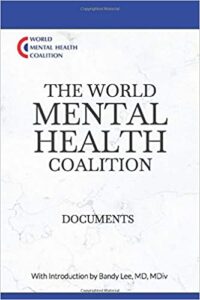